BCT-BR-0006
This brochure publicized the Ercole Marelli firm, which Marelli founded in 1891 in Milan. The firm's production facilities, described in the brochure, were in Sesto San Giovanni (Milano). The Marelli firm was one the leading industrial producers in 1911 Italy in the electromechanical and elecrotechnical arenas, and the Exposition was a fertile territory to advertize the firm's innovations. The firm secured ample exhibit spaces in the Galleria dell' elettricita' in Turin 1911.

This brochure aligns the trajectory and success story of the Marelli firm with the Exposition's narrative of national evolution and universal progress. Founded by the initiative of one man, the firm counted 1,500 employees and 1911, with subsidiary establishments in Turin, Berlin, Naples, Paris, London, as well as Buenos Aires, Argentina.  The brochure emphasizes the link between patrotism and sense of the nation (Italianita') with pride for the "emancipazione industriale dell'Italia nostra" and advocates for a stronger presence in Italy (in 1911, apporximately 3/4 of the Marelli production was exported abroad, a sign that industrial production and industial consumption were not aligned in a country where only the North West was significanly industrialized). 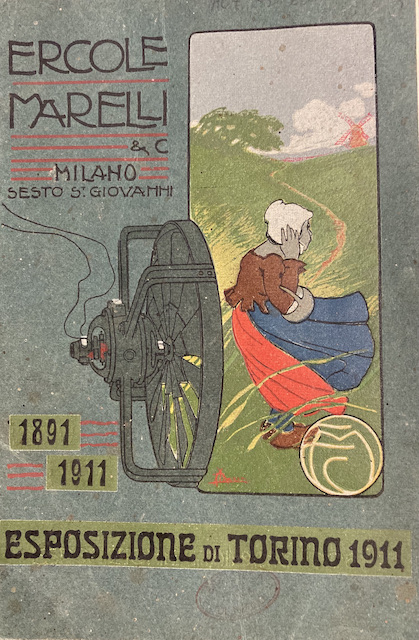