Parellal to their individual engagement, participating countries of Latin America decided to create two special Committees for Turin World’s Fair in 1911: an Honor Committee (including C. Althaus, B. Caviglia, G. Falcone, E. Levy, G. Penso, B. Sanguinetti, N. Zanelli) and a General Committee. As well as in the case of Honor Committee, members of the General Committee were mostly Italo-Americans who served in diplomatic or administrative roles: Ettore Panizzoni was elected as President, Luigi Bizzozzero and Mario de Albertis as vice-Presidents, and Cav. Orsino Bonci as architect and technical director of the works. 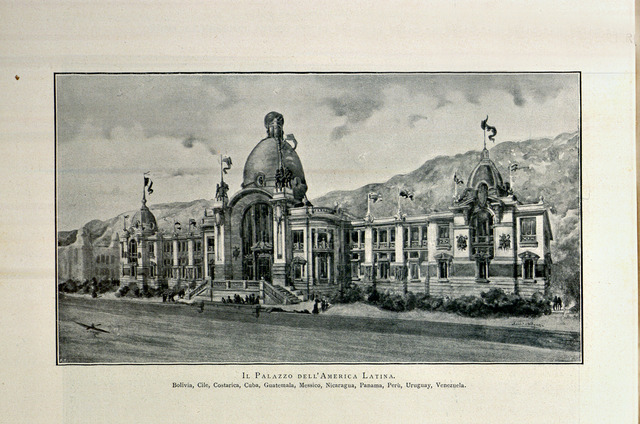 As suggested by the Giornale Ufficiale Illustrato, only thanks to “accanite insistenze” (stout insistence) of both the Committees, Latin American nations joined the Exhibition; Uruguay (the exhibition involved most of the Pavilion) was the first government that communicated its adhesion, followed by Venezuela, Ecuador, Perù, Valparaiso and Santiago. Indeed, the Committees found several obstacles in involving the young independet nations; for instance, in a letter sent to Tommaso Villa (November 1912), the President of the General Committee Ettore Panizzoni praised the role Cav. Giuseppe Falcone played in negotiating with the Government of Perù.

As in the case of Perù, also the other governments were facing several problems such as poverty, foreign interventions, and internal struggles although the moment of apparent political independence. However, Latin America was starting its process of modernization: waves of immigration from Europe stimulated economic growth, new commerce relationships were created with the European countries and new investments in mineral industry, transportation and infrastructure were made. In conclusion, although the Committees’ effort, not all the countries of Latin America joined the collective exhibition and, for instance, Paraguay, St Salvador, Colombia and Haiti refused to participate. According to the Giornale Ufficiale, they "forgot the great economic and social relevance of these massive exhibitions of labor, where the countries prove themselves and compare each other with the aim of progress and development."