BCT-TM-0001
The Pianta Monumentale was published by the Turinese publishers Ajassa and Ferrato, who also published the Guida pratica della Esposizione Internazionale di Torino 1911, which included a copy of the same map. The map sold for 30 centesimi (cents). It is very similar, but not identical, to the map featured in the Touring Club Guide. The cover features the allegorical figure for the motherland known as "Italia turrita." Italia is represented as a woman of classical beauty wearing a crown "with towers." The towers represent the Italian history of independent "comuni" or city states. 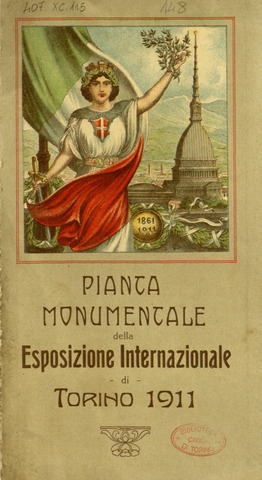 Italia turrita here holds a laurel twig, emphasizing the figure's victorious and patriotic symbolism (in other personiofications, Italia holds a bunch of corn ears, symbolizing Italy's agrarian economy and the fertility of the land more in general).

In this image, the reference to Italia turrita underscored Italy's urban traditions, also made clear by the emblem of the province of Turin on Italia's breast. The Italian flag wrapped around Italia's body implies that national and local traditions are organically fused in the space of the fair--a concept that the fair organizers never tired to reiterate. This fusion, however, had a hegemonic subtext, as Turin was competing with Rome to impose its own values onto the national script. The counterpart to the allegory of Italy in this cover image is the Mole Antonelliana, the unique emblem of Turin, and the highest building in the country.