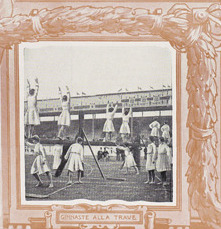 The deep interest towards sport events and the extreme care the Exposition Committees placed in scheduling the program reflected Turin's aspiration to be nationally and internationally recognized as a center of innovation and progress. Sport events such as archery and fencing competitions paid homage to Turin's military traditions (the first school of fencing was founded here in 1849, with the name of National Guard Society of Education and Charity). Turin also aimed at presenting itself as the cradle of modern sport events such as automobile races and aeronautical shows (the Automobile Club Torino was founded in 1898). Mario Morasso writes in Illustrazione Italiana:

The Valentino Park became the center of outdoor activities: rowing clubs and swimming societies established their headquarters in the park; strollers enjoyed spending their leisure time walking along the park's shady boulevards, but also skating, running, and being involved in occasional games of bocce balls.

As far as professional sports are concerned, Turin had assumed a leading role since the early nineteenth century, when gymnastics was introduced for the first time in Italy (Ferrara). King Carlo Alberto hired the Swiss teacher Rudolf Obermann in order to introduce gymnastics as an educational tool in local schools. Later, Obermann was able to promote – not without obstacles - his innovative discipline and methodology, in both military and civilian institutions. In 1844 he founded the Society of Gymnastics open to civilians (mostly aristocratic and bourgeois practitioners), and obtained permission to establish a national school for gymnastics teachers in 1861; a few years later, the Society began to play a leading role in the gymnastics educational programs of public and private schools.

However, gymnastics was not the only discipline that placed Turin at the forefront of modernity. With the end of the XIX century and the change in customs and style of life, the popular interest towards this exacting discipline left space to more enjoyable and “trendy” activities, such as English foot-ball, lawn-tennis, criquet, and also swimming, archery, horse riding and cycling (Ferrara). The city became a point of reference for rowing, mountain climbing, cycling, soccer and motor racing: for instance, in 1863 Cerea- the oldest Turinese rowing club - was founded, followed by Canottieri Esperia (1886), Canottieri Armida, and Caprera.

Sport clubs were mainly frequented by the bourgoisie, and in 1891 (emulating the tradition of Cambridge and Oxford) the first University rowing race was organized by the schools of Law, Medicine, Math and Literature on the Po river. In the same period, In addition, other societies were being formed: the aristocrat Quintino Sella inaugurated the Italian Alpine Club (CAI) in 1883, and the Turinese Veloce-Club was established (it counted 172 associates in 1889). Cycling was a very popular sport at every level, and Turin hosted the first Italian championship of this sport in 1888. Finally, soccer and motoring achieved such a massive success in Turin that the first Italian soccer championship was hosted here in 1898 (four Turinese teams and Genoa) as well as the first national car race (Torino – Alessandria – Torino).