Even a flying visit to the lower terrace will not prove devoid of interest, descending the steep staircase that in true native style leads down to it. Thence, by an easier flight of steps, one may go down to the very green banks of the Eridanus, no less fair, no less clad in sunlight and verdure in the summer season, than the far-away Me-Nam where the prototypes of the Siamese Pavilion proudly rear their golden spires (Gerini lxiv).

The builders of the Pavilion of Siam decided to reproduce the original style of ancient Brahmanic temples, rather than imitate the style of those that had been modernized. The Pavilion had a cruciform structure, with triple storied polychrome roofs and a tapering gilded central spire (Gerini xlix).

The Pavilion covered an area of more than 1,000 square meters, inclusive of terraces (800,000 without the terraces). Its facade on the river Po was 65 meters long. In Gerini's words: "The main building consist[ed] of three large halls, teh principal and largest of which [was] that forming the central part, while the other two, a litte more elongated, branch out on either side towards the galleries. These are surmounted by a roof in two superposed tiers surmounted by a pyramid-shaped spire, culminating in a slender gilt finial. The whole framework of the roofs ans spire--as in all buildings of the Siamese style, even of brickwork--is entirely of wood" (Gerini li). 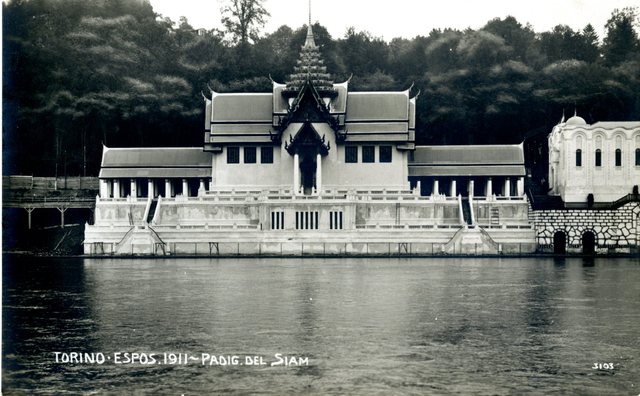 A triple order of terraces, connected by steep steps leading toward the river Po, formed the basement of the Pavilion. The terraces and stairs featured railings supported by graceful piers. The spaces between the piers were occupied by tracery painted in green imitating "the perforated glazed tiles of the same tint used in Siam" (Gerini l).

The central doorway featured colorful ornaments on the door posts and pediment, and was protected by a covered prostyle. The door posts and the corners of the Pavilion were not plumb, but inclined slightly toward one another, following the typical style of these buildings. Little golden bells graced the eaves and, by swinging in the breeze, produced a gentle sound.

The exterior of the building was white, which set the polychrome decoration into relief. The capitals were moulded ofter the traditional lotus pattern.

In reproducing the architectural structure of ancient temples and palaces, architects Rigotti and Tamagno followed a precise allegorical script. Gerini points out, for example, that the crested eaves of the roof represented serpents held by their tails by the eagle-like bill of the mithical king of birds. The scaly structure of the roof's polychrome tiles represented the serpent's skin. The three-storied roof of the cruciform pavilion, typical of royal palaces, represents the king's power over the three worlds. An image of Buddha sitting on the three-headed elephant of Indra was included in the tympanum of the gables. The central spire of the Pavilion displayed a seven-storied structure representing "the seven tiers of Heaven or maybe the planetary spheres" (Gerini liii). The slender apex of the gilded pyramid symbolized a sunbeam.

Gerini offers a detailed description of other symbolic decorations and architectonic details that are not discernible in the surviving photos and drawings of the Pavilion: "Two flagstaffs [. . .] from both ends of the lower terrace in front of the Pavilion, rise slimly before the lateral galleries, surmunted by a golden figure of the sacred swan, hamsa, the vehicle of Brahma [. . .]. Above the golden swan towers the white conical umbrella in many superposed tiers, emblem of the universe; this being depicted, almost as in Dante's conception, in the form of a cone with seven concentric circles of mountain ranges culminating in the mythic mount Meru, apex and fulcrum of the world. [. . .] The white or golden umbrella so shaped is the symbol of royal power. [. . .] Underneath the two emblems above referred to -- the umbrella and the swan -- flutters here the traditional Siamese flag, a white elephant on a bright-red ground" (Gerini LIII-liv).