The Pavilion of Russia: Reflection of Unity

The Pavilion of Russia was located on the left bank of the river Po, just behind the Medieval Castle and Village. According to the current Russian tendencies, in particular of St. Petersburg architectural school, the Pavilion followed the principles of Neoclassicism. It was designed by Vladimir A. Shchuko (1878-1938) who studied at the Academy of St. Petersburg, an academy notable for its rejection of all traces of modernism. Shchuko also developed a genuine passion for Classical and Italian Renaissance culture, following his sponsored travels to Italy and Greece. Indeed, his Pavilion featured classical elements and ornaments, purity of form and know proportions: the Doric order was the chosen style, symbol of simplicity and elegance.

The structure had twelve exposition rooms, where Russia could display its own traditional and industrial products, an enormous collection of statues and bronzes, and also some neoclassical furniture coming from the Royal Palace of Petersburg. The exhibition (traditional and national products) was inaugurated during the month of May 1911 by Grand Duke Boris and Grand Duchesse Marija Pavlovna, with a religious ceremony run by an orthodox pope (expressly coming from Rome).

The Russian Pavilion should be evaluated in the specific context of the Turin 1911 exhibition and in the wider context of other exhibitions and of contemporary St. Petersburg architectural tendencies.

The design of the pavilion displays a very centered approach. Shchuko favored horizontal expansion to vertical development (both the large pronao and the lunette limit the sense of height). As in many of his buildings in Kamennoostrovskii Prospekt, also in this case Shchuko chose undecorated rectangular windows recessed in a flat stone surface, and two blind windows surmounted by a small medallion. The building shares many elements with other examples of Neoclassical architecture. For instance, the main facade of the pavilion recalls the external design of the Second Mutual Credit Society building, built in St. Petersburg (1907-1908) by the young architect Fedor Lidval (1870-1945). 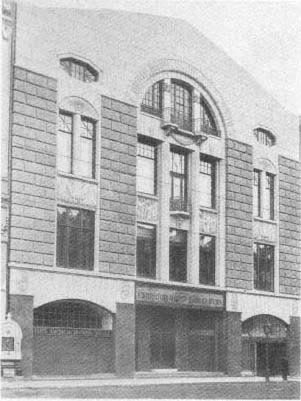 he exterior of the Pavilion featured a plain facade facing the river Po: however, the facade is enriched by a golden arch in the middle and two blind rectangular windows, symmetrical to the Doric central porch. Some years later, in 1914, another great interpreter of Neoclassicism in Russia, Roman Klein (1858-1924), proposed a similar solution for the “Cinema Coliseum” building in Moscow (1914). 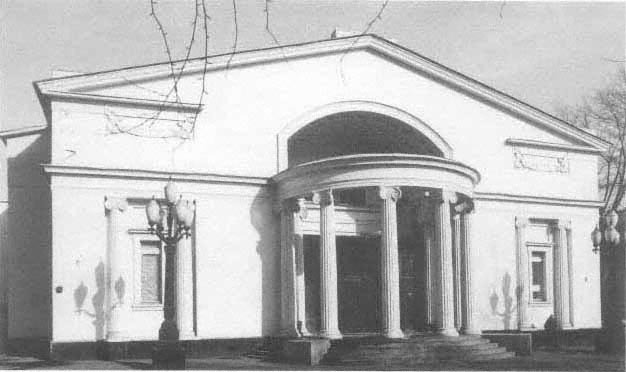 Klein, used a large number of historical styles, especially in his later works. As in Shchuko's Pavilion, Cinema Coliseum evoked the features of a classical temple and displayed a plain facade, a semicircular portico (in this case Ionic), and a “a recessed entrance framed by a large arch beneath the central pediment” (Brumfield, 281). Shchuko honored the Royal Family by inserting a huge statue of the Czar in the center of the facade, below the decorated bas-relief. As the Czar statue, the huge statues on both sides of the main access stairs are common elements of the Neoclassical style.