Dreaming of a Great Russia

The entire epoch of bourgeois and democratic modernism has given Petersburg nothing. Only the restoration of previous architectural canons can increase the beauty of our city. (Georgii Lukomskii, 1913. Brumfield, 1991 425)

Turin 1911 meant technology and progress. The Exposition reflected the innovative spirit and social mobility of the beginning of the Twentieth century. The architecture of the Fair was the spectacular result of this spirit, and it featured iron structures, Art Nouveau floral motifs, and electric illumination.

Besides glorifying the present, the Exposition Committees wanted to create a connection between the present and another great period of social and economic change in Turin. Therefore, they chose the local Turinese Baroque revival for many of the fair’s pavilions in order to confirm the grandeur of Italian architecture. This architectural choice was intended “to inspire ideas of historical continuity and social stability” (Della Coletta). By linking the past to the present, the Committees were attempting to shape a future where Turin would keep a central and active role in the Italian Kingdom. Furthermore, by featuring Art Nouveau floral motifs and concepts, the Fairunited “local interests” with the latest aesthetic tendencies on a European scale.

Alongside the multitude of nations that agreed to use the Turinese Baroque revival for their pavilions and delegated their construction to the three main Italian engineers in charge of the Exposition buildings – Molli, Fenoglio, and Salvadori -, Russia distinguished itself. The Pavilion was designed by a Russian architect, Vladimir A. Shchuko (1878-1936), and it featured a Neoclassical revival style. In opposition to the eclecticism and the bourgeois values of the modern style, the Neoclassical style of the Russian Pavilion aimed, in the architect's mind, to express order and symmetry. It paid tribute to the values of the Russian aristocracy and was meant to express Russian identity.

Vladimir A. Shchuko was a member of the Saint Petersburg School of Russian Architecture (notable for his giant order buildings such as the German Embassy by Peter Beherens in 1911-1912 and the Mertens Building by Marian Lialevich in 1911-1912). He was also a member of the Commission for the Study and Description of Old Petersburg (a preservation society headed by Leontii Benois). Shchuko was the most successful among the Russian architects of his time. His career was strongly influenced by the figure of Leontii Benois's (1856-1928) who was his teacher at the Imperial Academy of Art in 1896 and graduated from the institute in 1904. In addition, Shchuko’s frequent travels to Italy and Greece influenced his aesthetics, as his architectural projects featured classical and Renaissance elements, and reinterpretation of Palladian designs.

In St. Petersburg, Shchuko joined the architects Iulii and Leontii Benois in the requalification of the street Kamennoostrovskii Prospekt, and in the design of many commercial and private buildings. The Markov Apartment House (Nos. 63 Kamennoostrovskii Prospekt), for example, was intended as a variation of the Italian Renaissance Style (Brumfield, 1911), featuring huge Ionic columns, loggias and ornamental panels. Other examples of this first part of Shchuko’s career are the pavilions for the expositions of Turin and Rome in 1911, the Municipal Building in Kiev (1913, but restructured after World War I) and the monastery Smolnyi (1920) in Saint Petersburg. 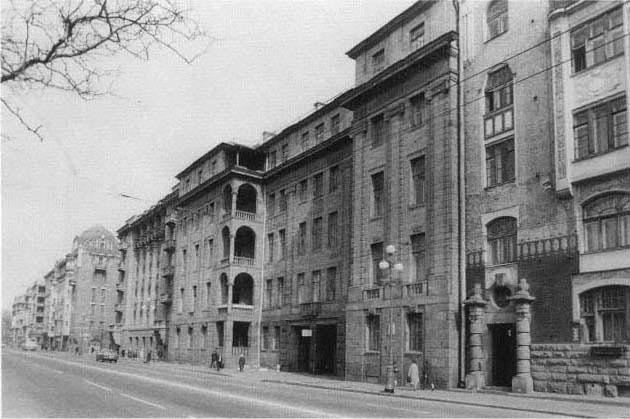 Shchuko was not the only architect working in a Neoclassical style, although before the First World War Russian culture featured a certain variety of forms (futurism, pre-modernism, Art Nouveau). In fact, according to Brumfied (1991), the Neoclassical revival occurred during one of the most productive phase for the “opposite” modern style. The key words of that specific moment were new materials, new aesthetic approaches, new canons and volumes. At the turn of the century, the appearance of the moderne style in Russia concurred with and was the artistic consequence of the new willingness of the nation to partake in the visual tendencies of the “European community”. In particular, the new bourgeois class of Moscow wanted to showcase the Empire as a restored nation, on the same level as the modern European powers and at the forefront of the international art scene. The Neoclassical style affirmed its predominance in 1910-1911, as it “encompassed both artistic and intellectual life” (Brumfield 1991, 237).

Specifically, Neoclassicism became the favored style for the new buildings in St. Petersburg, as it represented a precise ideological direction and constituted the historical platform to re-establish national identity, after the first revolution of 1905. As Brumfield argued, Neoclassicism, specifically in the forms of the Russian Empire Style established during the 1830s-1830s, was an expression of nobility and of ancient order/values. It displayed feelings of nostalgia towards the golden age of Alexander I, when Petersburg functioned as capital of the Empire. Many factors concurred to favor the success of Neoclassicism: the aesthetic propaganda of the art journals, such as Apollon, the shared feelings of nostalgia and idealism, current political trends, and the effort of young architects such as Ivan Fomin (1872-1936).

In 1902, the art critic and historian Alexander Benois (1870-1960) wrote the article entitled “Picturesque Petersburg”, published in the journal Mir iskusstva. In this panegyric, he attacked the modern architecture and defended the neoclassical heritage of the city, and encouraged his contemporaries to protect Petersburg from the violation of its architectural forms and features:

Save [Petersburg] from destruction, stop the barbarous deformation, and preserve its beauty from the encroachments of crude boors who treat the city with such incredible carelessness. (A.Benois, “Zhivopisnyi Peterburg,” Mi iskusstva, 1902, no 8: 138-42. in Brumfield 1991, 458.)

A couple of years later, Fomin also wrote his own panegyric (Brumfield, 1991) extolling the neoclassical structures in Moscow, in opposition to other new contemporary styles: By some strange stylistic act of trivialized species of people and their talentless artists, multi-storied buildings are already replacing these amazing structures from the epoch of Catherine II and Alexander I. (I. Fomin, “Moskovoskii klassitsizm”, Mi iskusstva, 1904, no 7: 187. in Brumfield 1991, 459.)

With the support of the Royal Family, by 1911 Neoclassicism was generally accepted as the style that better represented the new identity of the Empire, though it displayed different variants in Moscow and Petersburg. In fact, Neoclassicism was interpreted in many ways, such as: modification of Art Nouveau designs in a classical perspective, “modernized classicism” (renewing of Italian Renaissance and Classical model), and Empire Style revival. Compared to Moscow, the restoration of Neoclassicism in Petersburg was prominent and widespread: it involved commercial structures (Brumfield 1991, 237) and bank buildings, and private houses both in the center and the suburbs of the city (Kikirov, 111). The city was re-thinking its own identity, and such as Golodai Island, Stone Island, Kamennoostrovskii Prospekt, and Nevskii Prospekt.

1911 is considered as a crucial year thanks to three architectural projects in particular: the “Historical Exhibition of Architecture” (survey for Petersburg Society of Civil Engineers, to be held in 1908, but opened to the public in 1911), the Fourth Congress of Architects (January 1911), and the beginning of the “New Petersburg” project. Many architects and critics participated in the organization of these events, and shared their values and ideas, such as Fomin, Shchuko, Fedor Lidval (1870-1945), Marian Perietiatkovich (1872-1916) and Georgy Lukomskii (1884-1952). Ivan Fomin, for example, was asked to write a pamphlet expressing the aims of the Historical Exhibition: [Their work] characterizes the epoch even more than the work of first-class artists. In it one grasps the basis, the elements that are the essence of the style. . . . When the style was being formed, all the masters in the capital and the provinces worked toward the same end, not fearing to imitate one another. And in this is the guarantee of strength. In our time, on the contrary, everyone scurries about trying to be individual; everyone wants to invent ''his own," to do things deliberately not like others. As a result, there is no reigning style, nor does one see even those guides (vozhaki) who might in the future stand at the head of a movement deserving expression as something new. (Fomin, pag 446 del pdf) At the Congress of Architects, pleased by the return of principles of order in architecture, and by what he considered an attack to bourgeois individualism, Lukomskii wrote: Having endured an epoch of agitated searching for a new form, new beauty and ornamentation, and having being convinced of the impossibility of bright achievements are impossible without correspondingly new constructive devices and materials, architecture—like art—became ashamed of its irrationality. It is again joyously repeating and taking as its base the old national forms while waiting for the decisive discoveries of an iron architecture that has not yet found its superb form. (Georgii Lukomskii, Petersburg, 1911, Brumfield, 462)

Finally, the “New Petersburg” project was meant to involve Golodai Island, a largely undeveloped area north of Vasilevskii Island across the narrow Smolenka River. Here, a British investment firm initiated a development project in 1911, and put architect Ivan Fomin in charge of this initiative. The whole complex featured classical forms and was meant to re-create the former monumentality of the city: Roman arcades, colonnaded arches, reference to historical Roman monuments and ancient decoration (Brumfield, 1991). Unfortunately, the project was abandoned in 1913, when only one apartment building completed. However, the sketches for this development were impressive, and neoclassical revival remained predominant in the construction of private houses, as seen in the area of Kamennoostrovskii Prospekt.