Situated along the left bank of the River Po, in the heart of Turin, the Parco del Valentino extends between Ponte Umberto I and Ponte Isabella, covering an area of approximately 421.000 square meters.

There are numerous interpretations on the origin of the park's name. The earliest documents listing the name “Valentinium” date back to 1275. Some suggest that the park was named after a chapel devoted to San Valentino that was orginally built in the area. Other scholars claim that the area used to host a festival on February 14, in which each lady referred to her gentleman as her “Valentine”. 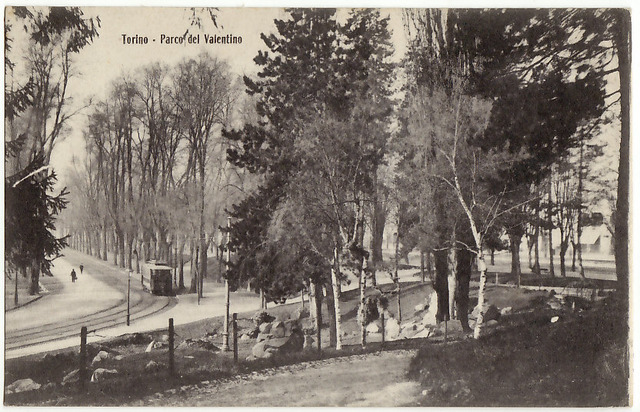 The modern park was created in 1630-1660, according to the project of Carlo Cognengo di Castellamonte and his son Amedeo. In 1864 French landscape architect Jean-Pierre Barrillet-Dechamps brught numerous improvements to the layout of the park, including new walkways, wooded areas, artificial hollows, a riding track, and a lake that was to be used as a “patinoire” during the winter months.

Besides Turin 1911, the park also hosted the International Expositions of 1884, 1898, 1902, and 1928.  The 1911 Exposition covered 1,200.000 square meters of land, extending into the right bank of the River Po from Ponte Umberto 1 to the Pilonetto. 380,000 square meters were occupied by buildings. The two banks of the river were connected by 4 temporary bridges, a service of "vaporetti" and two funiculars.