The choice of architectural language for the Pavilion of Hungary in Turin 1911 reveals Hungary's desire for political and cultural independence and its attempt to wrestle free from the Austrian Empire. There was no better opportunity to showcase the Nation’s intentions than a Pavilion at a World’s Fair. Budapest’s decision to feature Belgian Art Nouveau or English Arts and Crafts styles in many of its new buildings and projects around the time of the Exposition in Turin (instead of Vienna designs and decorative motives) had an eloquent political meaning.

The Pavilion of Hungary is based on a strictly symmetrical design. Visitors following the CTI itinerary, would see, on their left, “a tall conical tower rising from a blocky base flanked by two wings with conical roofs.”

Here was the main entrance to the “tent,” with a remarkable historiated half-dome with bas-relief figures guarded by colossal armed knights made by Miklós Ligeti (one of the main Hungarian sculptors at that time) underscoring the connection of the pavilion with the Hungarian military tradition. 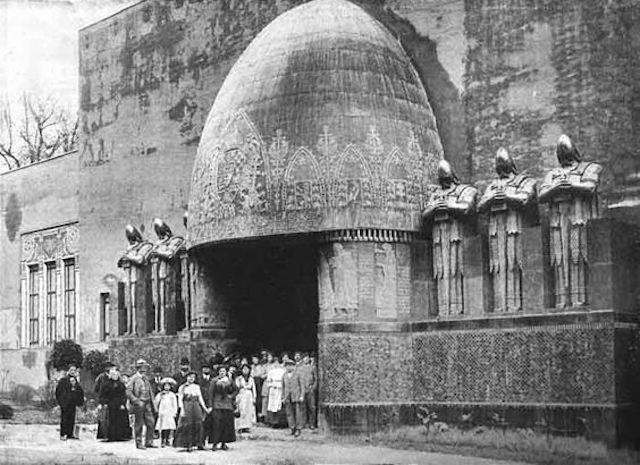 Light filtered inside from the top of the central glass dome and the light's effect were amplified by ornamentals mobiles.

On the external walls, the windows were tripartite: each one had four faux columns with flourished capitals and a decorated frieze above. A tall historiated cornice, spaced out by small windows, stood out from the yellow walls and circled around the building. It displayed stories of national heroes. 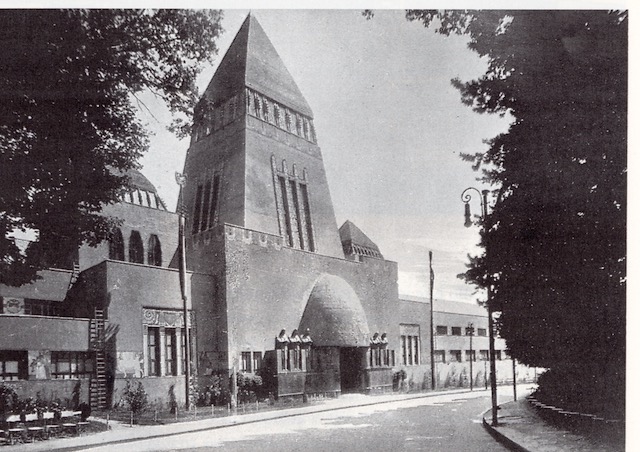 The view from the Po on the back side was even more fantastical, with two multicolored spires flanking the rear hall and framing the tall central tower (Alofsin 218). 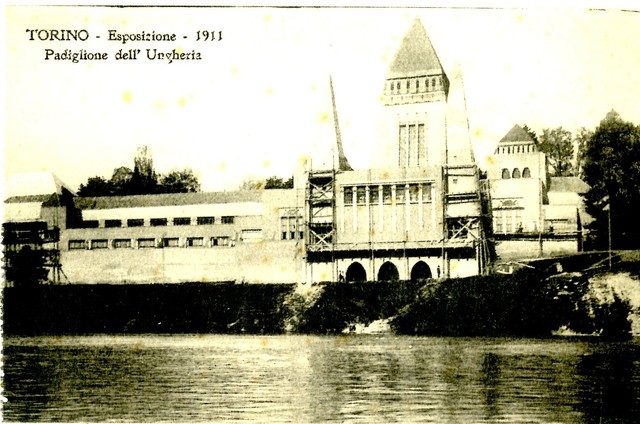 The Pavilion of Hungary should be evaluated in the specific context of the Turin 1911 exhibition as well as in the wider context of other exhibitions and contemporary Hungarian art and architecture. The external structure of the pavilion was an act of homage to the Castle of Buda and, especially, the Halaszbastya (literally “fisherman bastion”) – created by F. Shuleck from 1899-1905. The Castle of Buda was marked, like the Hungarian Pavilion, by several towers on different layers in order to make the overall structure more dynamic. Like the Buda Castle, all the towers of the Pavilion of Hungary had pyramidal roofs.

The side portal of the “Jewish Charity Home” created by Bela Lajta in 1909-1911 had the same features of the portal of the Hungarian Pavilion, including bas reliefs and inscriptions in stone, floral motives and geometrical patterns. Both display a rigid geometrical base surmounted by a half dome. In the case of Turin, the dome is jutting out, and reminds one of a tent, while the dome of the Charity Home is a simple half-arc.

Alofsin, Anthony. When Buildings Speak: Architecture as Language in the Hapsburg Empire and its Aftermaths 1867-1933. Chicago: U of Chicago P, 2006.