National Romanticism and the Hungarian Pavilion

"In the global struggle of nationalities we can only survive with a strong and vivid national culture" (Istvan Medgyaszay, in Imre, 33)

Though the Exposition’s Executive Committee allowed participating Nations to display their unique aesthetic taste in their national pavilions, several nations opted to appoint the Italian architects in charge of the Fair’s construction with the design of their pavilions. This was not the case of Hungary, a nation that understood the socio-political value of being able to create and control its official image on the international stage of the Turin’s World’s Fair.

Hungarian officials opened a national competition to select the best design for the pavilion that would represent the Hungarian nation to the rest of the world. Architects Emil Töry, Maurice Pogány, and Dénes Györgyi won the competition with a daringly original bulding, named “King’s Attila Tent-Palace.” The Hungarian Pavilion was praised for its ability to evoke a sense of motion in a perfectly geometric structure. The designers’ aim was to give visual expression to the power of the Hungarian military tradition, underscore its relevance to the present, and celebrate the strong and determinate nature of the Hungarian nation and its people. 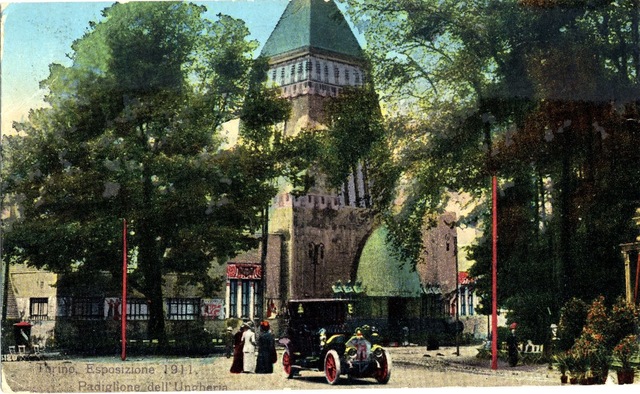 Made of wood, the Pavilion of Hungary combined the Romantic vision of the Tent-Palace of the ancient king Attila with the Modernist inspiration of its stern cubic blocks. Harmoniously fused in the pavilion, Romantic echoes and Modernist traits are the defining elements of Hungarian functionalism. The building is indeed a mirror of the lively social and cultural situation of the Hungarian nation, and particularly Budapest, during the first decade of the twentieth century (see nation-states: Austria-Hungary

Defining a precise architectural style for the Hungarian Pavilion is not easy. Anthony Alfosin’s recent volume When Buildings Speak, makes a useful distinction between the terms “style” and “language” (despite their synonimous current use). Alofsin argues that a “style” can be “defined just by a recognizable and repeatable set of motifs, organized by a conventional syntax” (Alofsin, 10). A "language” instead allows to give a more complete definition of the entire structure of a building and its interconnected, even hidden, meanings. Alofsin identifies five architectural languages that influenced the design of the Hungarian Pavilion in 1911: the language of history, language of organicism, language of rationalism, language of myth, and language of hybridity. Though each language carries specific meanings, together they share common features, such as the emphasis on nationalism and cultural identity, the nostalgia for the past, and a sense of eclecticism.

Throughout the late 19th century, Hungarian nationalism found eloquent expressions in literature, theatre and fashion, but at the turn of the century it displayed itself in architecture as well, namely in the style known as National Romanticism (or “folk romanticism”). Developed in Budapest between 1900 and 1914, this style constituted an eloquent expression of political opposition as it channelled the ideology of the Hungarian independentist movements in their socio-political and aesthetic resistance against the Austrian Empire. The English Arts and Crafts movement, especially in its Finnish elaboration, influenced the Hungarian National Romantic style as well. Both movements share the interest in the folkloric element, the revival of traditions, the rediscovery of archaic symbols in order to create an independent national language free of foreign influences and representing an entire people (Wiebenson). The the link between Finnish culture and Hungary is strong, due to the common linguistic heritage and, especially in this period, the similar political situation (Alofsin).

Around the turn of the century, several European nations participated in the development of the National Romantic style, especially countries that experienced situations of political instability and conflict: besides the two example of Finland the Scandinavian regions in general (in conflict with Russia) and Hungary (in conflict with Austria), other areas that created art according to this style were border regions such as the north of Austria, and the areas between Belgium and Germany, and Romania and Czechoslovakia. The architects who promoted the Hungarian National Romanticism were well aware of the cultural and political implications of their aesthetic choices. As one of the most eloquent promoters of the new national style, architect Ödön Lechner wrote:

The form language has great power of suggestion. Its ability to conquer is stronger than that of the literary language. Hungarian language has difficulties in spreading among the foreign tongues. People [of foreign tongue] do not understand it, nor do they want to-for political reasons. Therefore, we have to assist the Hungarian tongue with the help of the Hungarian form-language which reaches via the eyes (Lechner, in Cook 11)

And, as the art of Transylvania Hungarian people is derived directly from the Middle Ages, in my modest opinion the Middle Ages must be one of the parents of our emerging national style. No other artistic trend but one which builds on existing tradition can be healthy. Our people have accepted as the basis of their style that of the Middle Ages, and they retained it ever since. They found it suitable and they were able to make it their own, as we can see, and invest it as a national character. Our folk art is based on the art of Middle Ages, and our national art is based on our folk art. (Kos, in Wiebenson 237)

As evidenced in the design of King’s Attila Tent-Palace, architects Emily Töry, Maurice Pogány and Dénes Györgyi took into account these innovations and contributions in the creation of a National architectural language and identity.

Alofsin, Anthony. When Buildings Speak: Architecture as Language in the Hapsburg Empire and its Aftermaths 1867-1933. Chicago: U of Chicago P, 2006.