The Pavilion of Hungary was located on the left bank of the river Po, next to the Main entrance on Corso Vittorio Emanuele II and the Orto Botanico (botanical gardens). It was designed by Hungarian architects Emil Tőry, Móric (Maurice) Pogány, and Dénes Györgyi. An eclectic building, combining Art Nouveau elements with the features of National Romanticism, the Pavilion of Hungary covered 6000 square meters, and was considered "the pearl of the exposition."

Named “King’s Attila Tent-Palace,” the Hungarian Pavilion was unanimously considered the “Pearl of the Exposition” and praised for its ability to evoke a sense of motion in a perfectly geometric structure. The designers’ aim was to give visual expression to the power of the Hungarian military tradition, underscore its relevance to the present, and celebrate the strong and determinate nature of the Hungarian nation and its people. Made of wood, the Pavilion of Hungary combined the Romantic vision of the Tent-Palace of ancient king Attila with the Modernist inspiration of its stern cubic blocks. Harmoniously fused in the pavilion, Romantic echoes and Modernist traits are the defining elements of Hungarian functionalism. 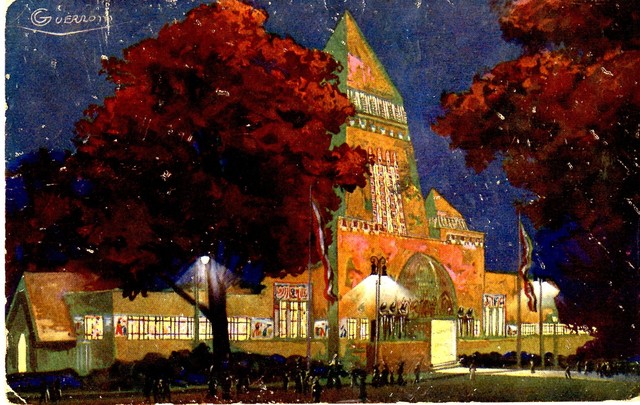 Hungary is so modern in aesthetic expression and so jealous of its national traditions. The pavilion is the most striking in the International exhibition: austere in its exterior, beautiful and bizarre inside, this building of noble proportions and harmonious coloring ... is reminiscent of India and Persia ... and inspired by antique Hungarian motifs. (Melani, 289)