Designed by architects Pietro Fenoglio, Stefano Molli, and Giacomo Salvadori, and erected by the Fratelli Viotti builders, the Monumental Bridge (or Ponte delle Vittorie) was made entirely of wood and plaster and measured 10,650 meters (approximately 34,940 feet) in length and 25 meters in width.  It consisted of 5 arches, each one measuring 2,130 meters (approximately 6,988 feet).  The bridge was graced by 12 columns with statues representing Winged Victories (“Il Coro delle Vittorie Alate”). Sculptor Francesco Sassi created the statues, and the columns and basements were by sculptor Del Santo. The bridge featured other sculptures as well, such as the twelve Titans by Giovanni Battista Alloati. The bridge was considered one of the main architectural features of the Exposition and was strategically located at the core of the fairgrounds, half way between the Borgo Medievale and the Castello del Valentino, next to the most prominent Pavilions.

The Castello delle Acque (also called Castello della Gran Cascata or Castello Di Acqua), was connected to the Bridge by a monumental staircase located on the Piazzale della Cascata.  Porticoed overpasses also connected the Pavilion of Germany and the Pavilion of France to the Monumental Bridge and the Castello.  The two castle towers were 80 meters high.  At the center of the Castle was placed a gigantic statue of Patria (Motherland) by Sculptor Contratti.   Two smaller statues, Giustizia and Sapienza were placed at the side of Patria and were made by Sculptor Chiariglione.  A massive waterfall graced the imposing structure. 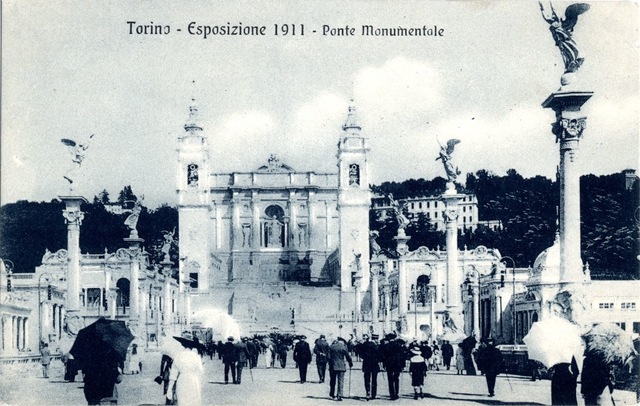