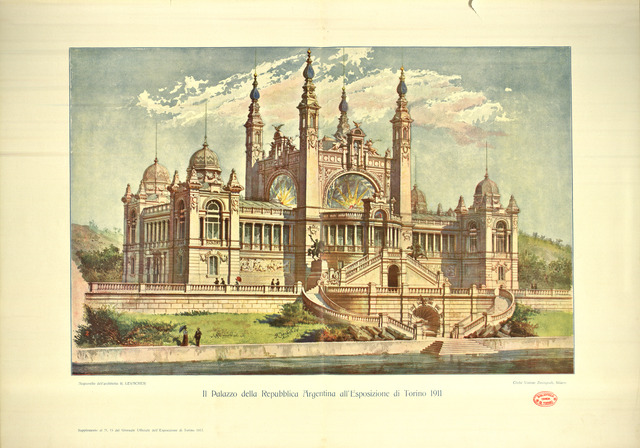 After the conclusion of the World’s Fair of Buenos Aires in 1910, the Republic of Argentina expressed its willingness to join the celebrations of Italian independence in Turin 1911, and the Congress budgeted a considerable amount for both the pavilion's construction and the exhibition set up (almost one hundred thousand liras). For this purpose, a special General Committee was created: Josè M. Maldran (President of Argentinean Rural Society) served as President, eng. Juan Pelleschi (General Commissioner of the Railway Exposition of Buenos Aires) as Vice – President, and eng. Carlo Di Girola (General Commissioner of Agriculture in the Universal Exposition of Buenos Aires in 1910) as General Secretary. In addition, the General Consul of Argentina in Genoa, Miguel Escalada, and the General Consul of Argentina in Turin, M. Angelo Bottero, were indicated as honorary Commissioners.

In the article “La Partecipazione della Repubblica Argentina” (The participation of the Republic of Argentina), the Giornale Ufficiale Illustrato talks about the country in a very enthusiastic terms. The journalist underlines the vastness of the land (“equal to Italy, Germany, France, Austria – Hungary, Swiss, Denmark, Belgium, Holland, Norway and Sweden all together”), the temperate climate, the fertility of the ground and the abundance of natural resources. In addition, he outlines the positive and recent achievements of Argentinean economy and industry, based on breeding (mainly beef and horses) and farming, and trading relations with Europe.

Indeed, the economy of Argentina developed since 1875 and, at the beginning of the XX century, the country took a noteworthy position among the world’s richest and healthiest nations. Thanks to agriculture exports and expansion of the territory (Patagonia and Pampas), as well as European investments and waves of immigration, efficient educational system and people’s excitement for the new era, the Republic grew up fast and achieved the apex in 1930. The request of involvement in the Universal Exposition of Turin was then accepted with enthusiasm by the young government as another occasion to show country’s economic growth and to consolidate international relations.