The Pavilion of Russia was located on the left bank of the river Po, behind the Medieval Castle and Village. The Pavilion was built with neoclassical rigor, following the style favored by the Russian Empire and its most renewed contemporary architects. As reaction to the ecleticism of the period, the Russian Pavilion expressed order and balance, and symbolized the return to peace and legality after the first revolution of 1905.

The Pavilion was designed by Vladimir A. Shchuko who studied at the Academy of St. Petersburg. Shchuko was a great admirer of Classical and Renaissance culture. The Russian Pavilion featured classical elements and ornaments, and highlighted the purity of form and proportion of the Doric order. 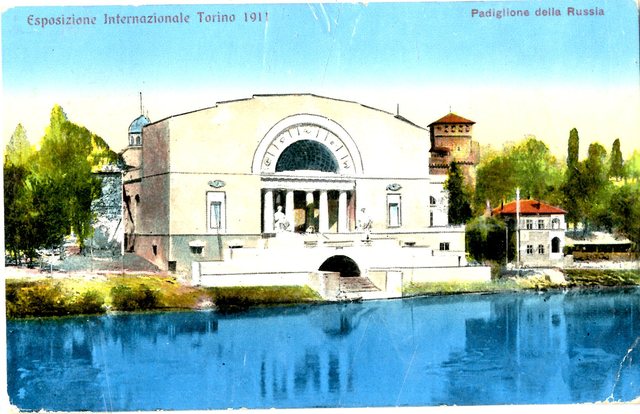 Having endured an epoch of agitated searching for a new form, new beauty and ornamentation, and having being convinced of the impossibility of bright achievements are impossible without correspondingly new constructive devices and materials, architecture—like art—became ashamed of its irrationality. It is again joyously repeating and taking as its base the old national forms while waiting for the decisive discoveries of an iron architecture that has not yet found its superb form. (Georgii Lukomskii, Petersburg, 1911)