The Pavilion of Germany was located on the right bank of the river Po, facing the Pavilion of France, and covering an area of 9,000 square meters. It was a huge and multi-level building designed by the three official architects of the Fair (Stefano Molli, Pietro Fenoglio and Giacomo Salvadori), and it was strategically located among the most powerful nations of that moment. Following the general architectural style of the other nation pavilions, the main body of the Pavilion featured an elegant portico, from where the visitor had access to the atrium, and the other internal galleries; the large dome was 42 meter high from the river bank, and it showed the Imperial German Crown at the top.

According to Carlo Levi (Mille patrie), Germany distincted itself for its internal exhibitions: in fact, the nation did not exhibit to the public its own industrial machinery or traditional manufactures like the majority of the other nations did, but it preferred to underline its military strenght. In the Great Hall, visitors could admire silver models that emulated the real German warships, featuring small conning towers and cannons, and a big gold statue of Kaiser William II in the middle of the room. 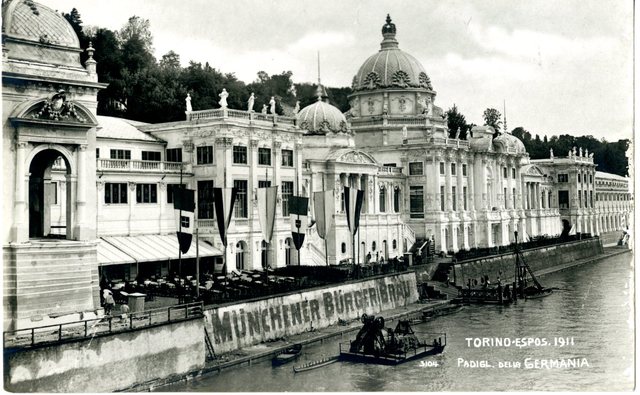 A large number of foreign nations have signified their intention of taking part officially in the exhibition. Among these, England, France and Germany [...] will make special efforts to turn the opportunities of the moment to the advantage of their commerce and industries. (USA, Daily Consular and Trade Reports, January 1910)