The Pavilion of France covered an area of about 14,000 square meters on the right bank of the river Po, and it was one of most sumptuous pavilions of the entire Fair. It was located north of the Monumental Bridge, next to the Palace of City of Paris and the fascinating Castle of Waters: its architectural structure (designed by the three official architects of the Fair - Stefano Molli, Giacomo Salvadori and Pietro Fenoglio) followed the Eighteenth Century style of the rest of the Exposition, and distinguished itself in elegance and grandeur. The building featured two floors: the main body included a large hall, covered by a daring and decorated dome, and two lateral wings, connected to the main façade through two colonnades.

This Pavilion and the prevailing presence of the nation itself at Turin Exposition wanted to emphasized both the hystorical friendship with the Italian Royal Family Savoi and the young Italian Kingdome, and commercial relations between the two countries. Furthermore, at that time, France was undoubtless one of the most powerful country of the world, and it controlled the second largest global overseas colonial empire: as mirror of its power and supremacy, visitors could see waving its flag also in different points of the Exposition, including the kiosk of Met et Chandon and the exhibition of French Colonies. 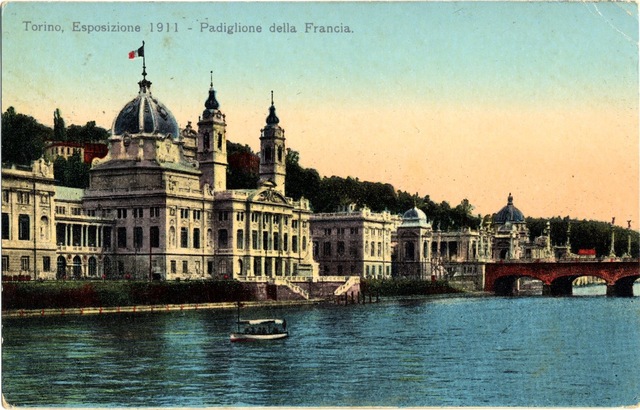