The Pavilion of Brazil covered an area of 8.000 square meters on the right bank of the river Po, and metaphorically closed the section dedicated to Latin American countries, before European pavilions. This was a crucial moment for the young Republic of Brazil (born after a popular revolt in 1889), and Turin 1911 was a precious occasion to show the national achievements in urban planning and public trasportation. To this end, as happened in the former Exposition of Rio de Janeiro in 1908 (the event was a real national celebration), the Brazilian elite worked to introduce a civilized Brazil to the international eyes, looking at European nations as standards of civilization.

The Pavilion, designed by the Brazilian engineers Moraes Rego and Jayme Figueira, and the architect Julio Antonio de Lima, should be the mirror of this new era for Brazil, characterized by richness and national pride. The architectural style approached modern lines, and it featured a single nave plan on two floors, surmounted by three ample domes with five little and symmethrical pinnacles each. 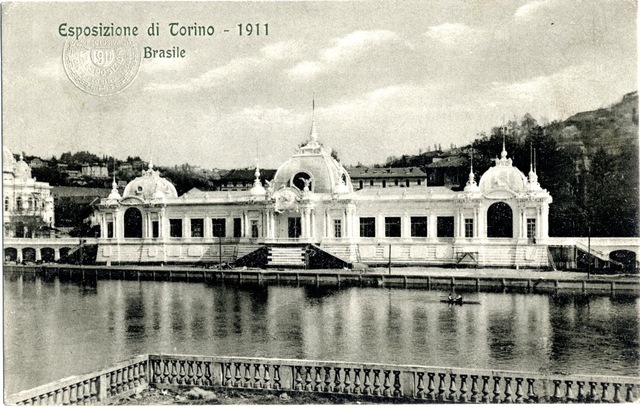 The Proclamation of Republic [1889] did not dampen elite interest in national and international fairs. Embattled at home, the young republican government did not hesitate to send official delegations to the universal expositions held in Chicago (1893) and St Louis (1904). (Daryle Williams, "Culture wars in Brazil: the first Vargas regime, 1930-1945")