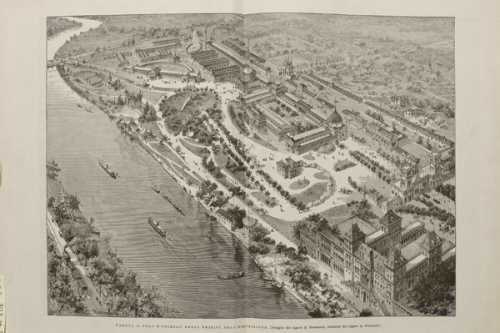 Fair organizers decided that the 1911 exposition in Turin required an overarching architectural style. They chose the Turinese baroque, as realized in Juvarra’s architectural designs. Juvarra had given architectural tangibility to the Savoy Dukes’ absolute rule by capitalizing on what aesthetics-as-spectacle could do for the spectacle of politics. With the stage-like features of Turin’s Piazza Castello, Juvarra underscored the spectacular attributes of his Theatrum Sabaudiae, a stage-like space designed for state-sponsored military parades and army drills. By turning back to a momentous period of its history, Turin reaffirmed its own myth of origin and valued genealogy.

As examples of the architectural culture of the revival, the buildings of the 1911 Turin Fair were intended to inspire ideas of historical continuity and social stability. By linking a metropolitan-specific aesthetics to a political agenda related to the birth and rise of the nation-state, Turin was proposing itself as the most legitimate representative of the Italian nation, or to quote Giovanni Robustelli’s definition, as “il centro e il faro della nuova Italia” (“the center and the beacon of the new Italy”) (4).